I have made pie:

I cheated a bit -- I used regular store-bought crusts rather than make my own. I also used the 16th century pie, which is much more sugary than the 14th century one. (Tho, try that one. You can use regular pie shells for that too.)

I have, in fact, seen the post on the Cooks Source page with the apology. I think that is about the best I am going to get. I am; however, completely unsure whether or not any donations were made either to the Columbia School of Journalism or the Food Bank -- but -- I have made some phone calls to look into it and I shall let you know, one way or another.

And now -- a shout-out to my fantastic attorney who has helped me out through all of this: Akiva Cohen at Foley & Lardner LLP. He has been utterly fantastic, super quick with answering my questions, and I highly recommend him. He also has a dogdaughter named Tehila (not tequila!) -- which means Praise in Hebrew. He totally deserves praise for his work for me. :)

The good news in all of this is that I think I know what my Ice Dragon Entry (which only us medieval food geeks probably know what Ice Dragon is) is going to be this year. Heh. Heh.

Again, I would like to thank you all who have shown an interest in what happened to me. It is flabbergasting and overwhelming. Much love to you all -- especially those who have followed the golden rule (please use your powers for good) and have been nice to the advertisers. I would like to point out that 2nd Street Baking Company (one of the advertisers that pulled out of Cooks Source) has asked that if you would like to support those advertisers pulling out of Cooks Source, you can donate to the Food Bank of Western Massachusetts here - http://www.foodbankwma.org/

A number of you have also commented that you have donated to the Columbia School of Journalism. Good for you and thank you!

I am trying to read everything but, again, a bit overwhelmed with the amount of comments and information. If you really need to get a hold of me, please contact me at @illadore over at twitter.

Next, you all have been asking me a lot of questions. I have been trying to answer what I can but let's talk about some of the basics (as I understand them):

Plagiarism is when one takes another's work and basically says its theirs. If I were to take say take the beautiful poem "This is Just to Say" by William Carlos Williams and slapped my name on it and called it "The Ice-Box Poem," then that would be plagiarism.

Those are the basics. After that, it gets somewhat complicated, which is why you get a lawyer. On that note, I have found a very nice attorney who is working with me. :)

Still no contact from Cooks Source since the Tuesday email.

I have no real plans on writing a cookbook -- there are some amazing ones out there on medieval cookery already, including anything written by Terence Scully (especially The Neapolitan Recipe Collection), as well as books by other authors such as The Medieval Kitchen. They have done some absolutely beautiful scholarly work on the subject -- I am just an amateur that likes to take those recipes and make them into food.

On that note, for everyone who said they were going to make my apple pie recipes -- awwwwww. You know just what to say to make a cook happy.

AND someone paid for my Livejournal for a year. THANK YOU, INTERNET PERSON! :)

So, you kinda broke my email.


I love you all dearly!! I have been trying to read everything that has been posted but, OHBOY, the amount of Livejournal comments have been huge!!

Many, many, many shout-outs to reddit.com, fark.com, gawker.com, gizmodo.com, slashdot.org, Wil Wheaton, Neil Gaiman, John Scalzi, and dozens and hundreds of others. (Neil and Wil and Warren Ellis! My nerd life is complete!)

But the BIG THANK YOUs go first to Jeff Berry, fellow mediveal food nerd. He is the one who originally informed me about the magazine article. His blog is at http://www.panix.com/~nexus/cooking/

Second goes to Nick Mamamtas: http://nihilistic-kid.livejournal.com/ -- He is the one who originally picked up the story and from there it went viral. Nick's an amazing author.

I am also AFK for the next day or so (I did not expect to get internet famous today!) but if you are trying to get a hold of me, I will do my best to get back to you.

Last but not least -- I have had no personal contact from Cooks Source. They have my number and my email and as far as I can tell, have not tried to personally contact me. I have had some people report that the editor responded via Facebook but it was...an interesting comment and not the response I was asking for. (Which was -- 1 apology on Facebook, 1 apology in the magazine and $130 to Columbia School of Journalism as a donation.) I am not actually sure it was a "real" response.

More later. Thank you all for your comments. Please be kind and remember the Golden Rule. Please do not harass the advertisers.

Monica
PS. And remember -- Be mighty!*

First -- I have heard absolutely zero from Cooks Source -- however, HELLO INTERNET!! NICE TO SEE YOU!! Welcome to my blog!!


@neilhimself retweeted this story: http://twitter.com/neilhimself !!! -- My nerd life is complete.

(tho it will be more complete is @wilw would comment too... :)

This is now on the front page of reddit: http://www.reddit.com/r/WTF/comments/e147w/website_article_gets_copied_without_permission_by/ -- HELLO REDDITORS! Nice to see you!!!

If it gets posted elsewhere, please feel free to repost it here.

And, first and foremost, I am utterly grateful and thankful for all the lovely and wonderful comments I have gotten so far. Internet -- you rule. Thank you so much.

The tl;dr version of this post: My 2005 Ice Dragon entry, called "A Tale of Two Tarts" was apparently printed without my knowledge or permission in a magazine and I am apparently the victim of copyright infringement.

The story:
I was contacted early last week by a friend of mine who lives in the Northeast about my "As American as Apple Pie - Isn't!" article that was published in Cooks Source magazine, mostly to inquire how I had gotten published. This was news to me, as I hadn't ever heard of this magazine before.

However, some basic Google-fu lead me to find them online and on Facebook. In fact, after looking at the Cooks Source Facebook page, I found the article with my name on it on on "Page 10" of the Cooks Source Pumpkin fest issue. (No worries, I have screencaps.) The magazine is published on paper (the website says they have between 17,000 and 28,000 readers) as well as being published on Facebook as well.

So. I first phone the magazine then send a quick note to the "Contact Us" information page, asking them what happened and how they got my article. (I thought it could have been some sort of mix-up or that someone posted it to some sort of free article database.) Apparently, it was just copied straight off the Godecookery webpage. As you can see from the page, it is copyrighted and it is also on a Domain name that I own.

After the first couple of emails, the editor of Cooks Source asked me what I wanted -- I responded that I wanted an apology on Facebook, a printed apology in the magazine and $130 donation (which turns out to be about $0.10 per word of the original article) to be given to the Columbia School of Journalism.

What I got instead was this (I am just quoting a piece of it here:)

"Yes Monica, I have been doing this for 3 decades, having been an editor at The Voice, Housitonic Home and Connecticut Woman Magazine. I do know about copyright laws. It was "my bad" indeed, and, as the magazine is put together in long sessions, tired eyes and minds somethings forget to do these things.
But honestly Monica, the web is considered "public domain" and you should be happy we just didn't "lift" your whole article and put someone else's name on it! It happens a lot, clearly more than you are aware of, especially on college campuses, and the workplace. If you took offence and are unhappy, I am sorry, but you as a professional should know that the article we used written by you was in very bad need of editing, and is much better now than was originally. Now it will work well for your portfolio. For that reason, I have a bit of a difficult time with your requests for monetary gain, albeit for such a fine (and very wealthy!) institution. We put some time into rewrites, you should compensate me! I never charge young writers for advice or rewriting poorly written pieces, and have many who write for me... ALWAYS for free!"

I got nothing.
Scratch that. I sure as heck do. Let's go over the major points: 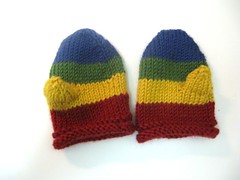 rainbow mittens
Originally uploaded by rani23
Baby mittens! Well, not so much a baby anymore, more like toddler mittens. 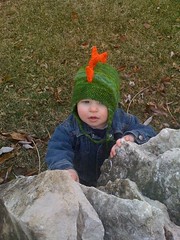 collin dino hat
Originally uploaded by rani23
The dino hat I made for Collin, being modeled by the recipient. :)
(I'm so glad that his mom was able to get it on his head and keep it on. :) 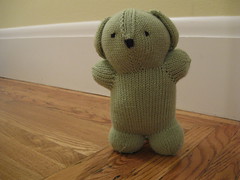 bear 034
Originally uploaded by rani23
A lovely green bear for Owen. Only a year late. :)

I used the Bobbie Bear pattern. Honestly not sure what yarn I used, as I lost the label over a year ago.

That is all.
Collapse